A little back story to start this review off: I met Peter Gasston, the author of The Book of CSS3, at Front Row Conference in Krakow (highly recommended for 2012, by the way). 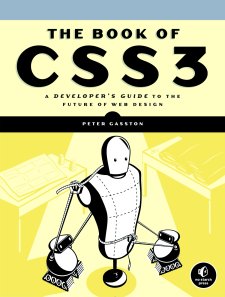 Book of CSS3 by Peter Gasston

The book is sold as ‘a developer’s guide to the future of web design‘; a (perhaps acceptable?) bit of marketing guff, since you can use everything in the book now – it just won’t work in certain browsers, yet. The obligatory chapter list is pasted below from the publisher’s website for The Book of CSS3:

One of my initial concerns with the book was it’d cover techniques I already knew (most of the books I buy, read and review are more software-specific), but I managed to learn a couple of very useful and previously entirely alien techniques (matrix3d being one). The book also clarified my understanding of some existing CSS. Retrospectively, this is what I would have expected to have get out of reading the book.

Peter’s also put a huge effort in to the companion website for the book, thebookofcss3.com, but that’s not too much of a surprise if you consider he’s a contributor to css3.info too.

The book is extremely thorough; from accessibility concerns to z-axis and ‘zebra striping for tables‘. The book’s index is equally thorough, reinforcing its usefulness as a reference book and just a one-off read.

The CSS and HTML snippets throughout the book are nice and clear, and well explained. I’m particularly keen on the way proprietary attributes (e.g., -o-border-radius) are (generally) omitted from code snippets, which allows you to see the general gist of the CSS without wading through lines of duplicate attributes.

Proprietary attributes are explained in subsequent sections of the chapter, which is especially useful given the discrepancies and inconsistencies between implementations (particularly, I must say, between Mozilla and Webkit implementations). For this in particular, the book is a good go-to resource. The screenshots are also clear throughout the book – a rare achievement for a black-and-white book which deserves some kudos itself.

One of my favourite ‘features’ of the book is the ‘browser support’ section at the end of each chapter, which contains an overview of (surprisingly), the browser support for the various attributes covered within the chapter; an invaluable resource for future reference, again.

A thanks to the publishers, No Starch, too, for their incredibly swift response to my request for an image of the book cover. It was a matter of hours, rather than days, when it can take some publishers a matter of weeks, or even months, to respond!

I did have one negative; the printed book is entirely black and white, (though you can get the ebook in full colour, obviously). As I said, this isn’t as much of a problem with example screenshots as you’d think, since the examples are very carefully put together to avoid most issues with colour contrast.

And, best of all – I certainly didn’t find any gripes I could classify as ‘ugly’.

The Book of CSS3; overall impression

I’m incredibly impressed with the The Book of CSS3, from the enviable, concise style of writing to the sheer thoroughness of the topics covered, and the clear, consistently presented examples. I’d say it’s a worthwhile buy even more for experienced front-end developers (and, dare I say it, a necessary buy for any back-end developer?).