Drupal, for those who have had their heads stuck in the sand for the last few years, is one the world’s most popular open source content management systems/frameworks, with websites such as the White House, Sony and MTV using Drupal to support their. Drupal 7 provides a drastic change and improvement from Drupal 6, not just in terms of theming but with an substantial overhaul of the administration panel.

Drupal 7 Themes, as you can see from the table of contents above, covers a lot of content over its 299 or so pages. As someone used to theming for Drupal 6 (and that was quite some time ago!), Drupal 7 was quite a sidewards step in terms of theming

The book’s also proven useful for Nathan, a beginner to Drupal, who’s been working on an internship through Sunderland University for the Young Entrepreneurs Trust website, for which the next iteration is based on Drupal 7: it’s been a great point of reference for both of us as we’ve worked towards getting the new website up and running! 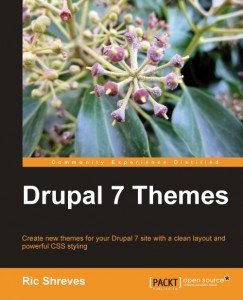 Style of the book

The book is written in Packt’s usual informal style, with easy-to-follow steps for each task covered in the book. Due to the nature of Drupal theming, Drupal 7 Themes requires the reader to have some basic PHP knowledge alongside HTML/CSS, although PHP is typically fairly well described throughout where necessary.

The book is pretty thorough in covering most content I, as a themer, would want to see about Drupal. No time is wasted in covering the basics of HTML/CSS (these are assumed, and rightly so).

Some of the most useful chapters in the book for me were Customizing (sic) An Existing Theme (an improvement on what documentation/guides are currently available online, as far as I could see) and Creating a New Theme, although at between 20 and 25 pages per chapter, I felt more ground could have been covered here, particularly in giving more detailed information about the use of sub themes and live examples of these. Chapter 10, Useful Modules for Themers, was also a highlight for me: I suspect what I learnt from this chapter alone will save me quite a bit of time in future Drupal-based projects I work on.

I feel the book let itself down in the indexing of content: when using it as a reference point I found it nearly impossible to track down what I was after in the index and resorted to the table of contents instead. Some of the tasks also suffer from a lack of screenshots clarifying where you should be in terms of progress towards specific goals, but nothing to the extent that the book is useless, thankfully.

A little disclosure, as always: Packt offered me a paperback copy of this book (worth £27.99 / $44.99 – hardly bank-breaking!) in exchange for this review. As with previous reviews, though, I’ve spoken my mind on the content and the way the content is covered.